It is excellent that the Resolution Foundation has embarked upon serious macro-economic wonkery. Their opening salvo – “Recession Ready?: Assessing the UK’s macroeconomic framework” – is as good an introduction to the state of play as you can find. They call it “the most comprehensive assessment of the UK’s macroeconomic policy framework since the financial crisis”. Damnit, they are right.
You could also argue that it is way overdue. The Resolution Foundation is “an independent think-tank focused on improving the living standards for those on low to middle incomes”. Around three years into its existence, the biggest macro economic event of the past 80 years hit the UK causing Gross National Income to fall some 20% off trend. To calibrate that, any policy intervention that might raise GDP by 1% deserves a serious prize. Twenty times that is epoch-making. Future historians will wonder why we don’t go on about it more.
I have started and restarted this blog many times because a single post cannot asses something so comprehensive, and invariably does the thing a disservice. I will need to pick my target.
Anyway, first a shamefully short summary of the RF position:

That is a lot to unpack. Each superficially reasonable, the positions above might together add up to something revolutionary- a shift in the framework bigger than anything since 1992, or possibly since the Thatcher revolution dethroned fiscal demand management.
Revolutionary conclusions should not go down as easy as buttered toast. Ten or twelve years of argument and reflection have led me to perceive varying positions out there that cannot be adjudicated as settled. I want to address this from the hypothetical point of view of an adviser telling a Chancellor whether they should follow this scheme and pursue “a change in the framework so that fiscal policy can play an explicit stabilisation role within a credible framework for achieving long-run debt sustainability and low and stable inflation.”
Here are some minor reasons they might entertain:

Is weak aggregate demand the problem? By assumption it is – the RF is explicit in saying it is discussing policies for a recession. But absent some really sharp events, this will remain a point of contention. Inflation is on target, and by some measures the economy at capacity (e.g. record employment). Against this, some of us wonder if the capacity of the economy is endogenously determined – could we really have lost 20% of our know-how, irretrievably?

Don’t debt levels matter more? Chris Giles in the FT has reopened this, arguing that the commitment to have Debt/GDP falling is a damaging constraint on investment and should be ditched. But just four years ago, the view of Osborne’s Treasury was that outstanding debt was such a big deal that the government needed to target an absolute surplus by 2018. Relatedly …

Is a sterling crisis possible? Another big limit on the government getting to do what it wants is the ancient risk of the currency being repudiated – Britain as an emerging market country. Absurd, you might say; but that was before Brexit. It was what happened in the mid-1970s: no one was saying “hey, you borrow in your own currency, go nuts!”
I don’t personally think any of these objections should weigh too strongly – but they would all be considered in a traditional Treasury, and that Treasury is always worth bearing in mind.
Here is my larger problem: I am not convinced that fiscal policy would do the job the RF intends it to; more to the point, I don’t think the Bank thinks it would, in which case I am not sure the Bank’s “tacit cooperation” would be achieved. It very much depends on how you answer the question of how monetary and fiscal policy really interact. For me, this is the biggie and needs to be broken into a sub questions. When is fiscal policy effective at boosting demand

B. During a crisis.

C. Only when the Bank “can’t boost the economy any more” and

Why would you answer D? Well, go back to 2005. Rates are 4-5% or so and the government produces an unexpected £20bn fiscal boost, in spending and tax cuts. The Bank forecasts inflation to be on track (because that is its job). What does the Bank do? Not nothing; it already thinks aggregate demand is at the right level. Any uncalled-for increase in AD needs to be battled. So they tighten policy, until demand is basically back where it was. Fiscal policy has changed the composition of demand, but not its level (barring lags).
This is known in places as the Sumner Critique, and is acknowledged by RF, but in my view not emphasised enough. Until the Bank literally does not think it can in good faith forecast CPI inflation landing where it should, it does not think it is out of fuel. And as a result, it ought not to passively accept any fiscal boost.
This is not just a fairy tale, but literally how things turned out for 1994-2007. See the chart; in that period, the UK fiscal position swung from borrowing 7% to a net surplus, and then back to borrowing 2.5%; yet nominal GDP growth stayed absolutely steady. The fiscal stance was trumped by the Bank’s monetary stance. In the game of macro, the Bank moves last. 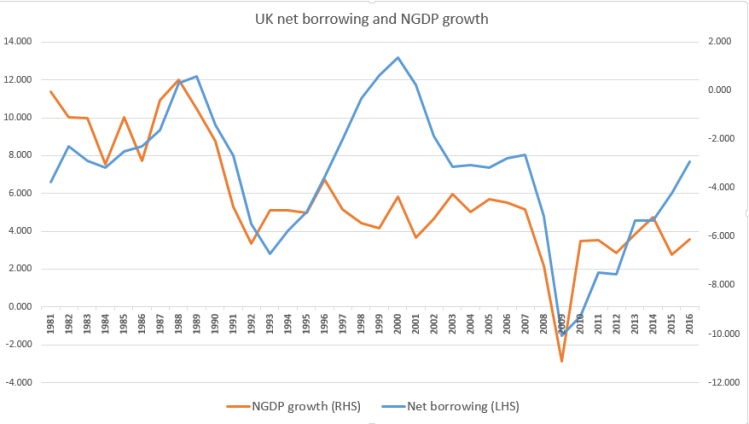 Are there other reasons to doubt fiscal policy? Here is one that niggles me, when I imagine advising that Chancellor. Suppose GDP growth is weak, and you plan a stimulus package of 1% to boost it. Pretend the Sumner critique does not apply. Fine; next year’s growth is 1% higher than it might have been – but your deficit is permanently higher. If you want to maintain that pace, do you not have to boost the deficit again? But an accelerating deficit is not sustainable. Ultimately, you have to reverse what you did and (ceteris paribis) you are back at the low growth you didn’t want in the first place. AFAIK, the case has to rest on a bunch of other nice things that will happen – perhaps one year of extra government-inspired growth boosts the private sector’s confidence permanently, or helps the supply side, or hits the exact right spot when growth was temporarily weak (there is a predictable cycle). But they are all rather nice assumptions.
Obviously, this critique falls away if monetary policy is really ineffective, and for some people that is true when rates are low. We are at risk of being in position C. Monetary policy “runs out of fuel”. But at some level that cannot be the case. Someone in possession of a printing press can surely boost nominal (i.e. cash) growth in an economy, at some limit.
What the authors half-assume is that monetary policy is really about lowering interest rates (either spot or long) and that this basically induces people/business to spend money. Other channels are brought up from time to time, such as portfolio rebalancing or expectations or commitment to being lower for longer (it is an excellent, comprehensive document) but the basic stance is that we hit diminishing returns as we get near zero.
I tend not to take this view, being over-influenced by the market-monetarists. This is no time to try to reincarnate all those arguments: I recommend reading Sumner in particular, pieces like this or this. But I am also very influenced by two other things. First, there is the record of Japan since Abenomics, which since 2012 is really remarkable, given the collapsing working age population. It has not been easy, but then Japan has other disadvantages that make it particularly hard – not least, their currency being a safe-haven that is continuously being bolstered in a crisis. And the rebound in NGDP has been incredible, and has happened despite fiscal policy being unhelpful. What Abe has done is painfully reorient expectations – a critical channel for monetary policy.

But, second, I come back to this: the case for fiscal policy “taking over” in particular circumstances, when monetary policy is weak, suffers when you think that monetary policy is in any way really still in control. And we can blog and tweet and argue, but as far as I can see, outside the absolute depths of a financial panic, for over 20 years, the Bank of England has forecast CPI inflation returning to exactly where it needs to be, without the help of the Government. It does not itself think it cannot control aggregate demand sufficiently. And that means whatever you are doing fiscally, the Bank in some sense does not think is necessary.
It is like a driver determined to drive at 50mph that notices the passenger sneakily leaning on the accelerator. The driver just leans on the brake a little more. The key point is the policy – 50mph. The Bank is the driver. And this is why I think all these arguments should always, always, return to what the Bank of England is actually targeting.

I'm a mid 40s, former special adviser (Downing Street 2017-19, BIS from 2010-14), former FT leader writer and Lex Columnist, former financial dealer (?) at IG, student of economic history, PPE like the rest of them, etc. This blog has large gaps for obvious reasons. The name is dumb - the CentreForum think tank blog was called Freethink, I adapted that, we are stuck now. View more posts